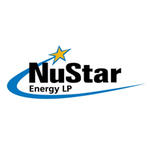 NuStar Energy L.P., a publicly traded master limited partnership based in San Antonio, is one of the largest independent liquids terminal and pipeline operators in the nation. NuStar currently has 8,643 miles of pipeline and 81 terminal and storage facilities that store and distribute crude oil, refined products and specialty liquids.

The partnership’s combined system has approximately 93 million barrels of storage capacity, and NuStar has operations in the United States, Canada, Mexico, the Netherlands, including St. Eustatius in the Caribbean, and the United Kingdom.